The average price of homes sold in the County in 2015 increased 12% over the year before. This would appear to be bad news for buyers, but it would be misleading to conclude that properties have increased in value by that amount. 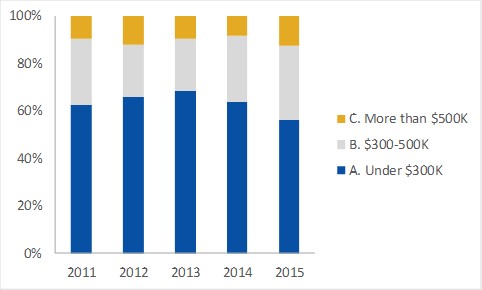 A large part of the increase in the average price was due to a change in the product mix of homes sold, with fewer lower-priced homes under $300,000 and more in the mid and upper price ranges.

By analogy, if a General Motors dealership had a month when they sold more Cadillacs and fewer Cheys, the average price of the cars sold would go up, even though the price of Cadillacs and Chevys was unchanged.