The real estate market in the western end of Prince Edward County has been hot, but the hottest spot may not be where you think it is. You may be surprised to learn that median prices in Consecon have risen fastest. 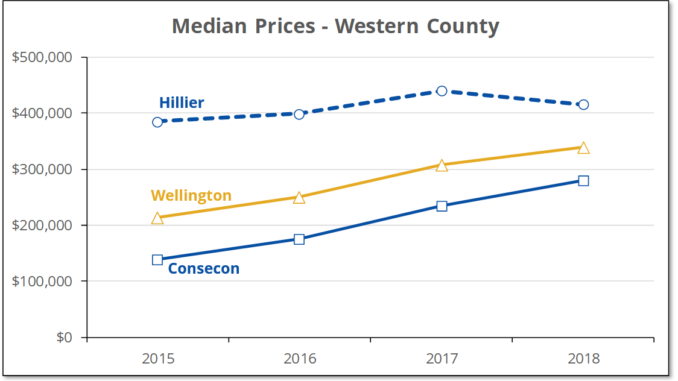 In the heart of the County’s picturesque and rural wine district, Hillier Ward has been the focus of a lot of buyer interest over the last decade. Similarly, though more recently, Wellington has gone from a quite village to a hot tourist destination with its fine dining and proximity to the lake.

Surprisingly, these have not been the areas in the western part of the County with the largest increase in prices. That honour goes to the village of Consecon.

Demographics have raised interest throughout the whole western end of the County. As the number of younger group telecommuters grows, many favour the western end because it’s up to an hour closer to Toronto.

But why should prices rise faster in Wellington than in Hillier, and faster yet in the village of Consecon.

Timing certainly plays a part. The vineyards of Hillier became sexy circa 2010, way before Wellington. As a result, properties there may be close to fully priced. To illustrate, in 2015, the median price in Hillier was 60% higher than either Wellington or Consecon.

Following this theory, Wellington is a later discovery, particularly since the arrival of the Drake Devonshire, so homes there are not yet fully priced.
Consecon, it could be argued, is just starting to draw the attention of out of town buyers, with the result that while median prices there started the lowest and rose the quickest.